Being one of the co-founders of the notorious file-sharing website The Pirate Bay means you constantly live on the edge of legality. But Gottfrid Svartholm Warg may have crossed that line completely. According to charges levied against him on Tuesday by Swedish prosecutors, he hacked into a bank, the government’s federal taxing agency, and several other companies.
"A large amount of data from companies and agencies was taken during the hack, including a large amount of personal data, such as personal identity numbers (personnummer) of people with protected identities," Swedish prosecutor Henrik Olin said in a statement. 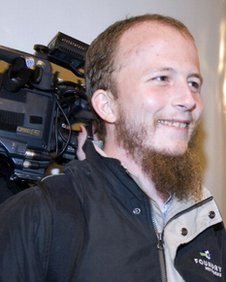 The Pirate Bay founder Gottfrid Svartholm Warg has been charged with hacking into several Swedish companies and stealing personal data. He and three other defendants are also accused of attempting to illegally transfer money from a bank. He is likely to stand trial next month. In September 2012 Warg was deported from Cambodia to his native Sweden to serve a one-year jail term for copyright violations related to his involvement in The Pirate Bay. He was also charged with hacking into the computer servers of Logica, a company that handles Swedish tax documents. He has now been charged with fresh hacking-related offences, including serious fraud, attempted aggravated fraud and aiding attempted aggravated fraud.
The Pirate Bay was set up in 2003 and quickly became one of the most popular destinations for accessing free films and music.

At its height the site claimed to have more than 30 million users worldwide. No copyright content is hosted on the site's web servers. Instead, it hosts "torrent" links to TV, film and music files held on its users' computers.The Pirate Bay recently changed its domain to one in Greenland, fearing that its Swedish domain name was about to be seized. But the Greenland domain was quickly blocked.
The site is back online in Sweden.
Posted by Adebayo Mofehintoluwa at 04:47 No comments:
Email ThisBlogThis!Share to TwitterShare to FacebookShare to Pinterest


"The ministry's electronic website has been penetrated by hackers," a source at the ministry said in a brief statement carried by the official KUNA news agency.

"The ministry immediately suspended the site as a precautionary measure and will take legal measures against those who did this."

The statement made no reference to the posting of a speech that opposition leader and former MP Mussallam al-Barrak made on October 15, but activists on Twitter said the text of the speech had been visible on the site for some time.
The ministry website remained suspended more than 10 hours after the cyber attack which happened at about midnight (2100 GMT) on Tuesday.
Barrak was on Monday sentenced to five years in jail over the speech which was considered offensive to Emir Sheikh Sabah al-Ahmad al-Sabah.
The authorities have not yet arrested Barrak, and thousands of people demonstrated in a show of support for him outside his residence for the second night on Tuesday.
They disrupted traffic at a key highway southwest of Kuwait City, watched on by police who took no action unlike on Monday.
Ahead of the latest procession, a new group of prominent activists defiantly read parts of the speech, a day after activists had been joined by former MPs in doing so.
Pro-government MPs on Wednesday strongly criticised Interior Minister Ahmad al-Humud al-Sabah for failing to implement a court ruling by arresting Barrak.
"There is a direct threat to the head of state... and a challenge to the judicial authority... These people (the opposition) hold no respect to the state, regime and the judiciary," MP Maasuma al-Mubarak said in parliament.
"If he (Barrak) refuses arrest, we should send him armoured vehicles from the army and the national guard," said Nabeel al-Fadhl, a pro-government lawmaker.

Posted by Adebayo Mofehintoluwa at 04:06 No comments:
Email ThisBlogThis!Share to TwitterShare to FacebookShare to Pinterest

The hacker group "ANON_0x03" affiliated with Anonymous hacktivists has invaded the website belong to Infantry branch of Argentina Army (infanteria.mil.ar).

The website has been defaced and notified in the zone-h mirror page by a hacker with the handle "voldem0rt".

We are still able to see the defacement page at the time of writing.  But the security breach was done 24 hours ago.

They also leaked login credentials belong to few Peru government websites along with the link to login panel.
Posted by Adebayo Mofehintoluwa at 04:02 No comments:
Email ThisBlogThis!Share to TwitterShare to FacebookShare to Pinterest

[Spam alert] While everyone horrified by the Boston Marathon bombings, the heartless cyber criminals ready to take advantage of this tragic incident and started to spread spam mails.

Earlier Today i received two mails with subject related to Explosions at Boston Marathon. The mail had nothing other than a link to external page [IP_address/boston.html]

When i tried to visit the "85.198.81.**/boston.html" page, the page with title "Hot News::Videos of Explosions at the Boston Marathon 2013" displayed some legitimate youtube videos . 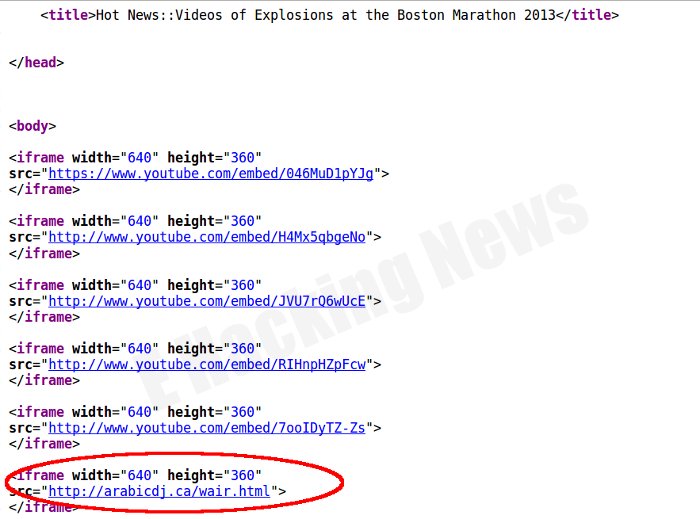 But, in background, the page load an iframe to a malicious page where the java exploit is being hosted.  Anyway, i am not able to download the .jar file because it is unavailable when i try to download.

It seems like the same link is being used in the spam mail received by Kaspersky Lab.  Kaspersky analyzed and found that malware tries to connect to several IP addresses in Ukraine, Argentina and Taiwan.
Posted by Adebayo Mofehintoluwa at 03:59 No comments:
Email ThisBlogThis!Share to TwitterShare to FacebookShare to Pinterest
Newer Posts Older Posts Home
Subscribe to: Posts (Atom)