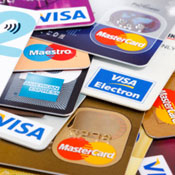 New Jersey is a hotbed of activity in the crackdown on card fraud. Federal authorities there announced last week that a fourth defendant has pleaded guilty in a case revealed in February involving a massive global credit card fraud scheme that spanned nearly 10 years.
The latest guilty plea in that case came about two weeks after another massive New Jersey fraud case grabbed headlines. That case involved the indictment of five alleged hackers with ties to Heartland Payment Systems hacker Albert Gonzalez in connection with a credit and debit scheme that is believed to have compromised more than 160 million cards

The latest guilty plea was in connection to a scheme that involved more than 25,000 fraudulent credit cards and resulted in fraud losses estimated to total more than $200 million.
"This is ... in fact, the largest case of organized credit card fraud in the U.S. as far as confirmed losses," says financial fraud expert Al Pascual, an analyst for the consultancy Javelin Strategy & Research. "The techniques the group utilized aren't anything new or groundbreaking, but, rather, it is the scale of the crime which makes it special."
Pascual says the case points out due diligence shortcomings. Banking institutions need to do more to ensure they are going back to review accounts, as well as loan applications, after they are opened.

On Aug. 7, the U.S. Attorney of New Jersey announced that Muhammad Shafiq pleaded guilty to one charge of conspiracy to commit bank fraud filed against him in February for the role he played in a credit card scheme that was built on synthetic, or fake, identities and fraudulent credit histories.
Shafiq is the fourth defendant to plead guilty among the 18 who have been charged in the case, federal authorities say. On July 31, Vernina Adams and Raghbir Singh pleaded guilty to the same charge that was brought against Shafiq. And on July 24, Mohammad Khan pleaded guilty to charges of conspiracy to defraud the United States.
Shafiq, Adams and Singh could face a sentence of 30 years in prison and a $1 million fine, or twice the gain or loss caused by their offense. Khan faces a maximum sentence of five years in prison and a $250,000 fine, or twice the gain or loss caused by the offense.
Khan's sentencing date is set for Oct. 30. Sentencing for Shafiq, Adams and Singh is set for November.

In February, federal authorities arrested 13 individuals allegedly connected to the crime. Several others allegedly connected to the scheme had already been arrested, authorities said.
The Federal Bureau of Investigation spent 18 months investigating the case, which dates back to 2003.
The scheme involved moving millions of dollars through accounts under the conspirators' control, as well as wiring millions of dollars overseas, authorities say. An investigative analysis identified $60 million in proceeds that had flowed through 169 accounts, with most of those funds being withdrawn in cash, investigators say.
Authorities contend that those charged in the case and their co-conspirators created more than 7,000 false identities and fraudulently obtained tens of thousands of credit cards they used to purchase lavish goods and stockpile large sums of cash.
Additionally, those charged allegedly wired millions of dollars to Pakistan, India, the United Arab Emirates, Canada, Romania, China and Japan, authorities say.
When they entered guilty pleas, Shafiq, Singh and Khan admitted they helped obtain credit cards in the name of third parties, many of which were fake, and then directed the credit cards to be mailed to addresses controlled by members of the conspiracy. They also admitted they knew the cards would be used fraudulently at businesses, with Khan admitting to personally using the cards.
Adams, during her plea, admitted to advertising on Craigslist to recruit individuals willing to add someone to their credit card accounts. She also admitted to selling other members of the conspiracy fraudulent trade-lines - a network of black-market businesses. Adams said she extended a fictitious line of credit to a false identity, backdated the line of credit so it appeared to have existed for a longer period of time and then falsely reported that the line of credit had been paid.


A Warning for Banks

The case offers some lessons for banking institutions, Pascual says.
"This crime illustrates the fact that issuers, and lenders in general, should be conducting post-origination reviews of internal loan data for trends indicative of large-scale fraud," Pascual says. "With 7,000 false identities having been used, there were undoubtedly individual institutions with hundreds of these fraudulent applications and/or cards."
Banking institutions should be scanning their card portfolios and previous applications for suspicious activity and other red flags on a regular basis, he says. Doing so allows loan issuers to cross reference findings and identify efforts to defraud the bank, Pascual says.
"The fact of the matter is that at first blush some loan applications can pass muster, but fraud mitigation should not stop once a loan is issued as some fraudsters take the long view over the immediate payday," he says.
One fraud prevention expert praises the recent crackdown on crime rings in New Jersey, but questions whether the action will have a meaningful long-term impact.
"It is good to see more charges being brought, but the fact is, the penalties for these crimes just aren't stiff enough to stop others from committing similar ones," says Shirley Inscoe, a fraud expert and analyst for consultancy Aite. "Millions of taxpayers are defrauded, banks lose millions of dollars, which they have to make up through larger fees, and then taxpayers have to pay for the trials of these crooks. It is maddening."

Posted by Adebayo Mofehintoluwa at 01:35 No comments:
Email ThisBlogThis!Share to TwitterShare to FacebookShare to Pinterest

Posted by Adebayo Mofehintoluwa at 01:20 No comments:
Email ThisBlogThis!Share to TwitterShare to FacebookShare to Pinterest

What is DHS CDM program and how its works

Continuous Diagnostics and Mitigation is a program which Department of Homeland Security (DHS) established to implementation approach consistent with the Information System Continuous Monitoring (ISCM) methodology.
CDM Mission
The Continuous Diagnostics and Mitigation (CDM) program provides tools and services that enable Federal and other government IT networks to strengthen the security posture of their cyber networks.
How CDM Works
The CDM Program enables government entities to expand their continuous monitoring capabilities by increasing their network sensor capacity, automating sensor collections, and prioritizing risk alerts.
This approach lowers the operational risk of information security systems and .gov networks.
About the Program
In 2012, the Office of Management and Budget identified continuous monitoring of Federal IT networks as one of 14 Cross-Agency Priority (CAP) goals, established in accordance with the Government Performance and Results Modernization Act.
To support Federal Departments and Agencies in meeting the CAP goal, DHS established the CDM program, an implementation approach consistent with the Information System Continuous Monitoring (ISCM) methodology.
Through its authority, DHS will ensure that CDM is consistently implemented, meets critical requirements for effectiveness, and leverages centralized acquisitions in the form of strategic sourcing.
The CDM program is housed within the DHS National Protection and Programs Directorate, Office of Cybersecurity and Communications (CS&C). The CDM program management office resides in CS&C’s Federal Network Resilience division.
Posted by Adebayo Mofehintoluwa at 01:16 No comments:
Email ThisBlogThis!Share to TwitterShare to FacebookShare to Pinterest

If you Knew you Were Going to be Attacked, What Would you do Differently?

Recent reports have found that cyberattacks against U.S. corporations are on the rise, along with an increase in international threats, especially from China, and emerging threats to small businesses. Today, it’s not a matter of if an organization will be the victim of a cyberattack, but when.
If you knew you were going to be attacked, what would you do differently to prepare your infrastructure? Here are the most important steps you should take when protecting your organization.
Dedicate Budget
When budgets are tight, money is funneled towards the revenue generating parts of the business, and security is placed on the back burner. Smaller organizations especially do not think they will be attacked and do not understand the value of security. They also often lack knowledgeable staff, training and resources. It is necessary for organizations of all sizes to dedicate sufficient resources to training and hiring IT staff, or to outsource their security needs to a third-party provider.
Assess Your Risks
It is important for organizations to have a clear view into the risks facing them. Some organizations might want to consider partnering with a consultant that can perform an audit and assess their risk profile. Then, the organization can put a plan in place to protect itself.
Take Action
Once you have identified the threats facing your organization, put the right technology and best practices in place to prevent them, for example:Put up firewalls
Upgrade code
Don’t forget about PCI certification: PCI is evolving and requirements will probably become stricter in the future. PCI certification can mitigate the risks to systems that store or transmit credit card data.
There are also several low-cost best practice solutions that can help you to substantially mitigate long term data loss and exposure. These include:
The threats to the organization are constantly evolving, and the security team needs frequent training to stay up-to-date on the latest risks. For example, financially-driven attacks have become a huge issue recently, as are new phishing attacks, viruses, worms and Trojans.
For example, the Downloader.MDW, better known as Dialer.XD, forces affected computers to generate a large amount of network traffic activity with the consequent consumption of bandwidth. It carries out actions that decrease the security level of the computer and uses anti-monitoring techniques in order to prevent it from being detected by antivirus companies. It also spreads across the Internet while being downloaded by other malware.
Also, the Linux.Apaback is a Trojan horse that modifies network traffic and opens a back door on the compromised computer. Although this Trojan is considered low risk as it is easily mitigated and removed, an unsuspecting organization caught off guard can be entirely compromised by allowing such a threat to exist.
In order to stay informed, IT staff should participate in security focused events, subscribe to mailing lists, and talk to their peers. Organizations should ensure that they have the latest patch versions. They should constantly scan for threats and plug vulnerabilities in a timely manner.
Beyond the IT department, basic security training is important for all staff. For example, all employees should understand password requirements and complexities.
Conclusion
In the security business, the good guys need to be prepared 100 percent of the time, and the bad guys only need to be right once in order to cause major damage. By following this checklist, you can help ensure that your business is prepared.