According to The Smoking Gun, a hacker using the name Guccifer recently accessed and leaked the personal photos and e-mails of several members of the Bush family.

"In e-mail exchanges with the person who claimed responsibility for the hack, the individual claimed to have swiped 'a lot of stuff,' including 'interesting mails' about George H.W. Bush’s recent hospitalization, 'Bush 43,' and other Bush family members. ... Asked if he was concerned about the FBI/Secret Service investigation that will no doubt follow shortly, he replied crytically, 'i have an old game with the f**king bastards inside, this is just another chapter in the game,'" The Smoking Gun reports.

"The Smoking Gun posted several of the hacked photographs, including one that shows the senior Bush in a hospital bed, another with him and former President Bill Clinton at the Bush family home in Maine and one of George W. Bush posing next to a cardboard cut-out of his face," writes Computerworld's Jaikumar Vijayan.

"Four photos display the younger President Bush's artistic endeavors, including two paintings, a photo of him working on a third painting and a photo of him posing with a cardboard cutout of himself dressed as a Parisian artist, complete with mustache and beret," writs TechNewsDaily's Paul Wagenseil.

"The Smoking Gun site, known for posting legal documents and arrest records related to celebrities, said the hacker invaded six email accounts, including one belonging to Dorothy Bush Koch, daughter of George H.W. Bush, as well as other Bush family members and friends," writes Reuters' Samuel P. Jacobs. "The U.S. Secret Service is investigating whether former President George H.W. Bush's email was hacked as well, the agency said on Friday."
Posted by Adebayo Mofehintoluwa at 06:02 No comments:
Email ThisBlogThis!Share to TwitterShare to FacebookShare to Pinterest

Children as young as 11 years old are developing malware

"Mostly kids writing malware are doing it to show off to their peers, by demonstrating 'hacking' ability," Ben-Itzhak wrote. "It could be stealing someone’s game logins. This might seem trivial at first, but online gaming accounts are often connected to credit card details to enable in-game purchases, and these may also have virtual currency accounts amounting to hundreds of dollars. Furthermore, many gamers unfortunately use the same login details for social networks such as Facebook and Twitter, potentially putting the victim at risk of cyber-bullying, in addition to identity theft and major inconvenience."

"The researchers found that many instances of malware targeting games popular with children shared the same characteristics," writes BBC News' Dave Lee. "Most were written using basic coding languages such as Visual Basic and C#, and were written in a way that contain quite literal schoolboy errors that professional hackers were unlikely to make -- many exposing the original source of the code."

"In one instance, a program that gathered login details from unsuspecting users of online game Runescape contained code that sent the information back to an email address in Canada," The Telegraph reports. "Researchers traced the email to an 11-year-old boy."

"Now, AVG is saying children must be taught the 'rights and wrongs' of coding by parents and schools, teaching them that using code to cheat or steal from a game is the same as theft," writse redOrbit's Michael Harper.
Posted by Adebayo Mofehintoluwa at 05:59 No comments:
Email ThisBlogThis!Share to TwitterShare to FacebookShare to Pinterest


Bit9 has acknowledged that its network was recently breached, and its own certificates were used to infect at least three of its customers with malware.

"Due to an operational oversight within Bit9, we failed to install our own product on a handful of computers within our network," Bit9 president and CEO Patrick Morley wrote in a blog post. "As a result, a malicious third party was able to illegally gain temporary access to one of our digital code-signing certificates that they then used to illegitimately sign malware."

"That last bit is extremely important, because Bit9 is a default trusted publisher in their software, which runs on customer PCs and networks as an 'agent' that tries to intercept and block applications that are not on the approved whitelist," writes Krebs on Security's Brian Krebs. "The upshot of the intrusion is that with a whitelist policy applied to a machine, that machine will blindly trust and run anything signed by Bit9."

"The malware signed with the certificates stolen from the company has been used against three of their customers," writes Softpedia's Eduard Kovacs. "As soon as the breach was discovered, Bit9 revoked the compromised certificate. In addition, steps have been taken to ensure that all the machines from the firm’s network, both virtual and physical, benefit from proper protection. While there’s no evidence that their products have been compromised, Bit9 is preparing a patch to automatically detect and neutralize malicious elements that illegally use the digital certificate."

"A Bit9 spokesman declined to identify the victims, describe the capabilities of the malicious software used in the attacks or say if the hackers had succeeded in harming its clients," writes Reuters' Jim Finkle.
Posted by Adebayo Mofehintoluwa at 05:56 No comments:
Email ThisBlogThis!Share to TwitterShare to FacebookShare to Pinterest 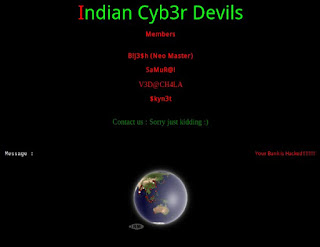 Indian Hacker group named "Indian Cyb3r D3V!LS" has hacked into the China Bank website and defaced the main page of the website(www.bbyinhang.com).

The Bibi bank network independent website, co-founded by a number of financial professionals committed to universal access to financial expertise to help the general public understand the products and services provided by banks, to cultivate rational, smart and confident consumers of financial.

The hacker claimed to have breached the site by exploiting the Remote File Inclusion (RFI) vulnerability.

Hackers claimed to have compromised around 1000 credit card numbers but they are not going to release/misuse the details.

""Chinese Hacker defacing Many Indian government and colleges along with Pakistan hackers.  Don't mess with us we are greater than you.. no respect for your f** security.. " Hacker said.
Posted by Adebayo Mofehintoluwa at 05:45 No comments:
Email ThisBlogThis!Share to TwitterShare to FacebookShare to Pinterest 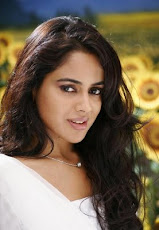 Indian actress Sameera Reddy has became a victim of cyber crime. An unknown hacker has spent ₹ 5 Lakhs on her credit card.

According to NDTV report, the hacker used the credit card across different locations around the world.

After spending the money , the hacker surprisingly called Sameera Reddy and informed her about the theft. The thief had apparently decided to call her up because he was a big fan of the actress.

“I was dubbing when I got a call. It was from an unknown number and the person on the other side told me he was part of a hackers’ team. I could not believe what he was saying,” Sameera Reddy said.

"I had my card with me but the bank authority asked me to pay up the dues. I kept arguing with them for two months. Finally, the matter has been settled," Sameera added.

Crazy hacker..! what do you think?!
Posted by Adebayo Mofehintoluwa at 05:44 1 comment:
Email ThisBlogThis!Share to TwitterShare to FacebookShare to Pinterest
Newer Posts Older Posts Home
Subscribe to: Posts (Atom)